IKHANA and Riverside County Working Together to Develop International Market 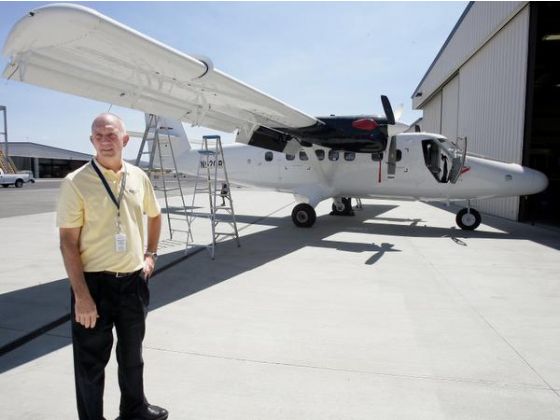 With a population of approximately 2.3 million people, Riverside County is the 11th largest county in the nation – and soon will be 10th, said Tom Freeman.

But Freeman, commissioner for the Riverside County Office of Foreign Trade, is looking beyond the bulging region’s borders – far beyond, in fact.

Freeman and the Office of Foreign Trade take a view that transcends county, state and national borders, in search of economic opportunities for local companies.

“We look at the world around us, and 95 percent of the world does not live in the U.S.,” Freeman said. “It only makes sense to take the products built in Riverside County’s 28 cities, and market them to the world.

“Our office is responsible for getting products from our county, that are made here, sold in new markets.”

The international market, whether it’s a fire department in South America or a regional airliner in American Samoa, is where the Office of Foreign Trade is helping companies make headway these days.

Phenix Technologies of Riverside and Ikhana Aircraft Services of Murrieta are two companies availing themselves of the county’s resources in recent years – including marketing and sales support, access to foreign embassies and employee training and education.

The Office of Foreign Trade has generated promotional material for each of them: composing a marketing letter for Phenix and producing a print ad for Ikhana’s Twin Otter aircraft – “available for immediate delivery,” the ad states – selling for $2.8 million apiece.

“This is not shotgun marketing,” he said. “This is precision marketing. We go right to these people.”

The Office of Foreign Trade, created in 2009 and part of the Riverside County Economic Development Agency, maintains the county’s official diplomatic relationship with 180 nations, according to its website.

Phenix Technologies Chief Operations Officer Angel Sanchez said his firm initially reached out to the city of Riverside Office of Economic Development a couple of years ago and was referred to the county.

“We contacted them and asked for help trying to truly engage the international market,” Sanchez said.

Sanchez said the company has been around for 42 years, and less than 10 percent of its business comes from the international market. Within five to seven years, the goal is to make it 50 percent.

“We’ve had international sales; however, they were typically more of they sought us out and we made the transaction,” said Sanchez. “We decided over the last two years to truly aggressively and proactively go after the international market. So we contacted and worked with a number of resources. But the county was incredibly helpful.”

Sanchez said one of the resources was the College of Foreign Trade and Export, which he attended.

“It was organized by the county and there were presenters from the county,” said Sanchez. “But they also brought in experts – kind of subject-matter experts – from numerous companies.”

That is where the county can do the most good, said Eddy Sumar, the president of ERS Consulting Services and a veteran of international trade dating to his days as an executive with Rain Bird International, which has done business in more than 130 countries.

He said he is happy to see agencies such as the county’s Office of Foreign Trade and the state’s Center for International Trade Development operating, but that their specific role should be to provide infrastructure and context.

“This is a great idea,” Sumar said. “But the county is not the expert. Their involvement is more in support. In my mind it works best when the county gets the resources and employs the experts.”

Ikhana’s director of sales and marketing, Bo Alksninis, said the company was originally based in Carlsbad and provided aircraft for productions such as the NBC TV series “Baa Baa Black Sheep” in the 1970s. It later relocated to French Valley Airport in Winchester, starting its relationship with the county, which manages the airport.

When a tour company asked Ikhana to look into modifying a Twin Otter for use as a plane to fly tourists over the Grand Canyon, Alksninis said it enlarged some windows, adjusted the weight load and created the Vistaliner. He said the company has sold 45 of those aircraft.

“That’s kind of what started us into the Twin Otter world,” Alksninis said.

Now the company produces a range of modified Twin Otter products that range in price from $2.8 million to $5.2 million, and has commercial and military applications. Alksninis referred to it as the flying version of a pick-up truck.

The company takes advantage of the pipeline between the county’s Office of Foreign Trade and the federal Commerce Department, he said.

“Pretty much every U.S. embassy has an arm, an office of the Commerce Department,” Alksninis said. “They try to promote U.S. businesses. And that’s the county’s doing. They’re tied into that network.”