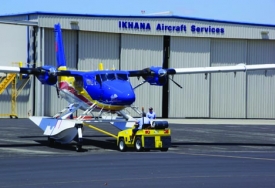 Check out the latest feature of IKHANA in AIN’s ShowNews at NBAA 2014.

Ikhana Aircraft Services, a specialist in extending the life of the popular DHC-6 Twin Otter based at French Valley Airport in Murrieta, Calif., has been remanufacturing aircraft long before the term became popular in aviation circles. Ikhana–the name stems from the Choctaw word for knowledge and intelligence–was created from the merger of engine specialist Total Aircraft Services and R.W. Martin, the originator of the Twin Otter VistaLiner conversion that opened up spectacular aerial tour opportunities by upgrading fuselages with huge passenger viewing windows. R.W.Martin converted 45 Twin Otters to the 19-passenger VistaLiner configuration, and many are still flying; some are now returning to Ikhana for maintenance and re-lifing.

The re-lifing of the DHC-6 Twin Otter is Ikhana’s bread-and-butter. In 1996, R.W.Martin’s highly trained sheetmetal technicians started disassembling and rebuilding Twin Otter wing boxes; then, in 2007, Ikhana’s workforce took over and, now, between the two companies, more than 115 sets have been rebuilt. The wing box is the major wing structure between the front and rear spars and it has a life limit of 25,000 to 33,000 hours or 50,000 to 66,000 cycles, depending on the model.

When a set of wings arrives or is removed at Ikhana’s facility, the technicians first un-rivet the lower wing skin then pressure wash and degrease the structure and remove all fatigue-critical components. Each wing box goes back together with new stronger stringers, larger doublers and thicker skins, all coated with epoxy primer to prevent corrosion.

Now Ikhana (Booth 3424) is starting to see Twin Otters with fuselages that are bumping up against their 66,000-hour, 132,000-cycle life limit and therefore in need of re-lifing. Flight controls share the same life limit as the fuselage, and Ikhana can re-life those as well. Nacelles are brought to life limits of 45,000 hours and 90,000 cycles. All re-lifed components receive new data plates, part numbers and serial numbers so they are “zero time” once installed, according to Ikhana. Once re-lifed, these components are interchangeable with the original components.

Roughly 500 Twin Otters were built before de Havilland shut down the production line, and now Vancouver-based Viking Air has resurrected the line with the new Twin Otter Series 400, of which more than 60 have already been delivered.

While heavy-duty work on Twin Otter airframes is much of what Ikhana does, the company also offers a host of Twin Otter services, including avionics, electrical, interiors, engine upgrades, paint, engineering, component manufacturing, certification and maintenance.

Ikhana Aircraft is also a Viking Air factory-endorsed service center for the Twin Otter and DHC-7, and the company buys more parts from Viking than any other customer. Ikhana has also done modifications and supported engineering work on the Gulfstream GII/GIII, Bombardier Challenger series, Boeings from the 727 through 787 and DC-10, Lockheed C-130, Hawker jets and Beechcraft King Airs.

The company can deliver an entirely remanufactured Twin Otter for about $5 million, significantly less than the cost of a new one. Another benefit of choosing an Ikhana reman is that buyers have a choice of avionics, where the new Viking Series 400 comes standard with a single offering: Honeywell’s Primus Apex flight deck.

A Twin Otter X2 was undergoing a complete re-lifing at French Valley during AIN’s visit, and this airplane is available for about $4.8 to $5.2 million, depending on the final avionics and options selections. The X2 includes new Pratt & Whitney Canada PT6A-27 engines, all-new wiring, all of the Ikhana airframe Re-Life packages (fuselage, wing box, flight controls, nacelles), new avionics and custom interior and paint.

Another recently completed Twin Otter is the DHC-6-200HG, which upgrades a -100 or -200 Twin Otter to the -300 configuration and performance, but with a lighter empty weight. The –200HG includes new Pratt & Whitney Canada PT6A-27 engines approved for 620-shp operation and a maximum takeoff weight of 12,500 pounds, up from 11,579. For even greater load-carrying capability, Ikhana offers the –300RG and –400RGmods, with maximum takeoff and landing weight increased to 14,000 pounds.

These upgraded Twin Otters are aimed at restricted category authorization special purpose-type operations such as forest and wildlife conservation, aerial survey, patrolling, weather control, cargo and search-and-rescue. But for added convenience, these models can operate under dual standard or restricted category FAAairworthiness certificates.

Vancouver-based Harbour Air Group operates two –200HGs, which it purchased in 2012. “The modification allows for a greater payload than a comparable DHC-6-300 series,” said President Peter Evans, “which translates into added capacity and increased passenger loads. We like investments that allow us to carry more revenue-paying passengers on the same aircraft, it makes good business sense.”

Another Canadian operator, G-Sky Aviation of Fort McMurray, Alberta, flies a –200HGon charters in the Alberta oil sands region. “With all my years in the operation of Twin Otters, I can say that Ikhana’s DHC-6-200HG is a brilliant example of how the aircraft should be configured to maximize its potential,” said Bill Houghton, general manager of operations.