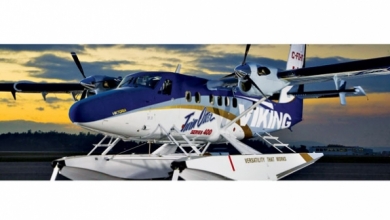 Viking Air celebrated the production of its 100th Series 400 Twin Otter in Calgary this past summer, and is showing the aircraft, replete with seaplane floats and executive interior, on the NBAA 2016 static line.

Viking showed the prototype Series 400 here in Orlando in 2008. “It’s been a long tradition,” Viking Air president and CEO David Curtis told ShowNews. “We like to put it in front of all those white jets and show off something different.”

Viking holds the type certificates for all out-of-production de Havilland Canada aircraft, from the DHC-1 Chipmunk through the DHC-7 Dash-7 50-passenger STOL regional airliner. The Twin Otter was introduced as the DHC-6 in 1965.

Viking acquired the de Havilland type certificates in February 2006. The decision to launch the Series 400, the company says, “was made after a market study, supported by the worldwide Twin Otter operator group, revealed a strong demand for the new platform to replace the aging legacy fleet.” The Series 400 was formally launched in March 2007, and the first production aircraft flew in February 2010. Transport Canada issued the Series 400 type certificate that June. Aircraft have since been delivered in nearly 30 countries.

“The Series 400 is an all-new airplane,” says Curtis. Viking collaborator (and competitor) Ikhana, he notes, continues to convert legacy Twin Otters. Ikhana provides service and support for Viking-built aircraft too, and in fact did the VIP interior for the aircraft on display here today.

“We build a new Twin Otter every 15 days,” Curtis notes, adding that the current backlog is about 15 months. He says the number flying passengers is difficult to pinpoint, as interiors can be readily changed to suit the mission – an attraction for numerous customers.

“When I take a moment to reflect on the Series 400 program from the original launch to completion of our 100th aircraft, and all the challenges we have overcome in between, I am truly amazed at what the Viking team has accomplished,” Curtis said this past summer. “While there was doubt that a relatively unknown aerospace manufacturing company on the west coast of Canada would be up to the task, here we are, 100 production aircraft later.”